What Monogamy, Monotony & Dog Food Fights Have In Common 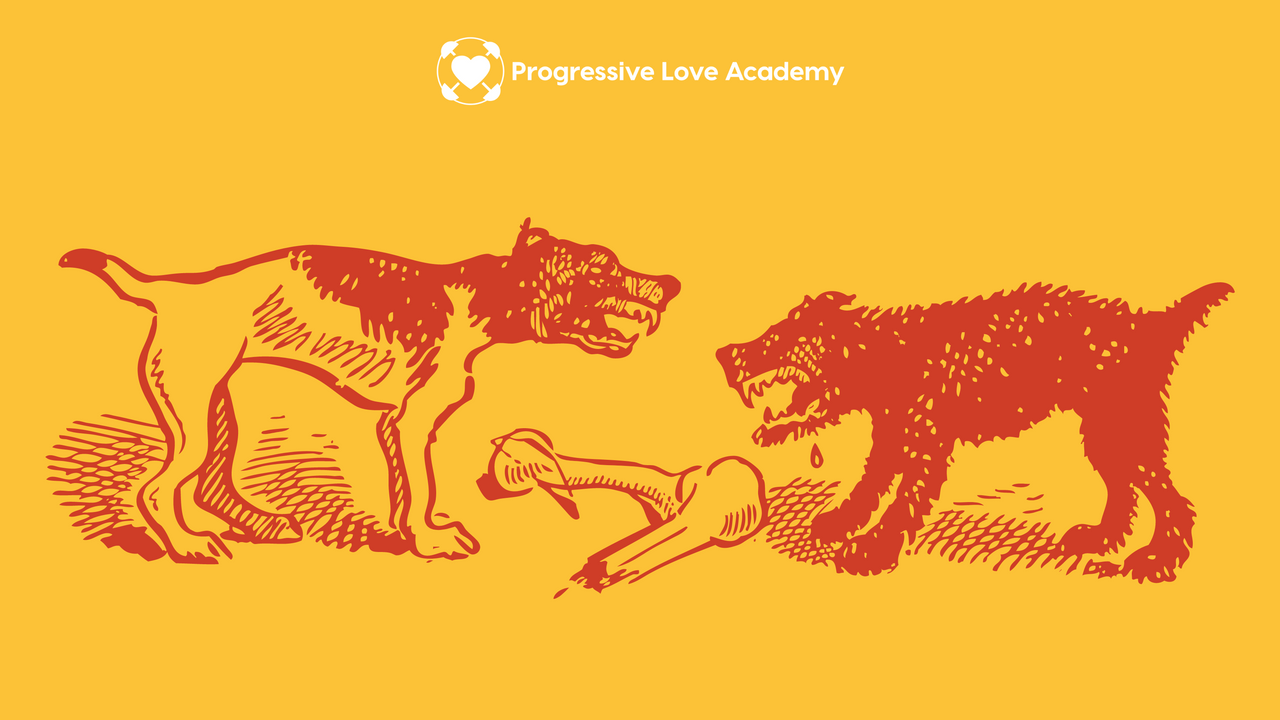 This weekend I had the pleasure of a fresh date!  I love meeting new people!   I'd met my date just a week prior on Tinder and alas we decided to walk our dogs together.  A walk in the woods is not a very hookup friendly date, I use the dating app, Tinder,  not to find hook ups, but to actually date quickly.  I don't want to do lots of reading, or scan a thousand and one profiles, so Tinder works well for me.

My date and I walked our dogs to the dog park.  The dogs played an hour or so, then back through the woods to a nice food truck for Cuban Empanadas.  Our conversation was light and airy, free and fun!  The topic of polyamory came up (and yes I place my poly status in my Tinder profile - see image below).

We'd spoken about his ex fiance who was willing and wanting him to have other sexual partners as she was less willing to have sex with him as time advanced in their five-year relationship.  I wondered if that was a good enough reason to do poly - lack of sexual desire of one partner.  I wondered, also, why he hadn't jumped at the opportunity but instead broke up with this woman!?

He told me his Catholic values would not allow him to date outside the arrangement.  He couldn't bring himself to find outside sexual partners when his own fiance was unwilling to have sex with him.  Further, he'd not want to find out that she was having outside partners, so why do it at all - on either side?

This conversation made me curious as to why he was on a date with me, a married woman, if his Catholic values were so intense.  He didn't really have an answer except that on Tinder, while I admitted openly to being poly, I wasn't as clear about the fact that I'm married.  In either case, being poly means even if I'm dating him, even if we actually formulate a relationship, I'm going to always stay open to connecting with more persons whom I enjoy or am interested in... so back to square one.  Right?

Our date was intriguing,  he asked if I'd like to do more hanging out.  I don't work on Saturdays, and my family is out of town, so I agreed to hang out a bit longer.  We decided to take the dogs back to my house and have a cup of coffee.  Now this move was pushing more towards a hook up... lol xx - but maybe not with this Catholic boy. Besides, there was an even greater sapiosexual orgasm in store for us both!

At home I discovered there wasn't anymore of that delicious Blueberry Coffee I'd been enjoying all week, so instead I cut a fresh pineapple to share.  The dogs, we noticed, were a bit hungry and thirsty too, so I poured more water into the bowl so they both might both partake. What we noticed, immediately, is the dogs became edgy when it came to the water bowl - we realized this was due to the fact that my dog's food bowl is situated next to the water bowl.

When his dog went to grab a drink, and took a quick sniff of and maybe a small taste off my dog's food - my dog went crazy!  She did not want the other dog tasting from her food bowl.  Now mind you, my dog, Teeka, does not even eat her own dog food - ever - hence it was in the bowl going stale - it had been in the bowl for at least two days as Teeka enjoys table food and many other treats! So why, now that the other dog is trying to eat it, is she upset?

This is where polyamory entered our topic thread again...  Look at those dogs, I'd note.  Teeka doesn't even WANT that food, but if another dog tries to take it, she's nuts!

This is so often the case with long-term partnerships.  It's not so much that one spouse wants the other spouse sexually, or passionately anymore - but he or she still simply doesn't want the other spouse to be wanted or enjoyed by another!

Now you'd think with us being humans, and dogs being... well, dogs, that we'd be set up differently internally and emotionally.  But from the looks of this scene with Teeka barking frantically over stale food that she doesn't want either way, we were reminded...

And the story went on, we noticed that once we gave the other dog a different bowl with his own fresh food, Teeka did lighten up and relax but she did not eat the old food she was barking over.  We realized it's not that she wanted to EAT the food, it's that she didn't want anyone else to eat the food.

Often I've noticed with couples, as long as no one is enjoying themselves in the relationship, things are fine.  But if one partner begins to have true enjoyment, even nonsexual enjoyment with a person of the opposite sex, the other partner fusses and fights until the other partner folds and gives up his or her outside enjoyment.  But then when he or she is back at home and in the flow of sexual AND EMOTIONAL monogamy, the partner who wanted the END to all the outside fun, isn't willing to provide any.

What are your thoughts on this phenomenon?  Have you noticed this to be the case in long-term partnership?  Does it prove humans are no better or smarter than animals?  Does it make a case for or against polyamory?  And most importantly, if humans are only cultivated to the point of the animal nature, is it time to cultivate humans beyond that?  Do we want to function in these emotionally primitive ways?  Or do we want to up-level into a more sharing, less dogmatic (ha! xoxo) sense of relationship?

Also - which is more 'spiritual' then... A tradition that attempts to have everyone deny their natural instincts by suppressing them and deeming them sinful, or a culture that understand and embraces, even confronts and calibrates these animal instincts and teaches ways to override them?

The most important thing I've found with Poly is it's what Catholicism claims to be - a spiritual initiation.  Enjoying a freedom-based relationship has moved me beyond slavery to the animal, beyond first impulse, beyond so much that is animal-like, within me!  Now this Catholic guy was able to see that maybe there is something a bit more spiritual about this practice than simply the act of having more sex with more people...  He was stuck thinking like the dogs while I was riveted by the fact I've moved beyond it.

This was a good date.  I think we'll have another.

I'll have to charge a fee if we will be coaching this way.  Or he can join my private groups to get started on a new journey!!  Maybe not a journey into Poly, but definitely a journey into a new, Progressive, way of viewing relationships xx

Get Notified When New Posts are Made

Sign up for our email list below and get tip, tools, and insights directly to your inbox..